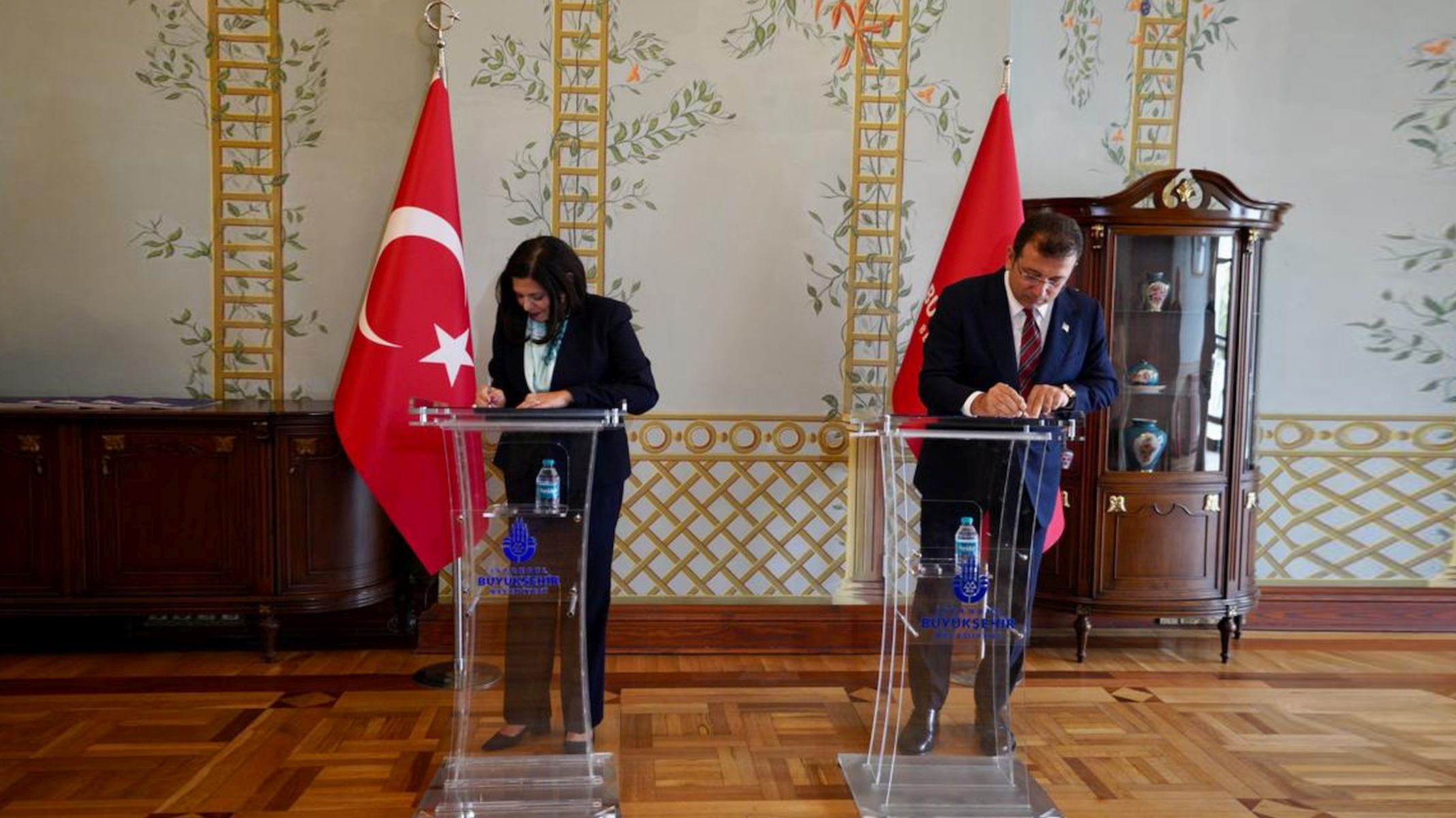 An additional €75 million loan agreement has been signed between IMM and the EBRD to be used in the Ümraniye – Ataşehir – Göztepe metro line project. Speaking at the signing ceremony, İBB Chairman Ekrem İmamoğlu “Previously, we took out another loan of 175 million euros for this line, which also included EBRD, Societe Generale de la Banque de trade and development of the Black Sea. With the financial support provided on August 27, 2019, we started the work on this line in the fastest way on October 10, 2019. Currently, the progress of our line is at the level of 55%. Now, with the 75 million credits we received at once, we will work hard to put this line to work for our people as soon as possible. We plan to open the Ümraniye – Ataşehir – Göztepe metro line in 2024,” he said.

An additional €75 million loan agreement has been signed between Istanbul Metropolitan Municipality (IMM) and the European Bank for Reconstruction and Development (EBRD) to be used in the Ümraniye – Ataşehir Metro Line Project – Goztepe. On behalf of IMM, the contract protocol prepared for the repayment of the loan is signed by the President. Ekrem İmamoğlu and Nandita Parshad, managing director of the institution’s sustainable infrastructure group, for the EBRD. Before the signing ceremony, İmamoğlu and Parshad gave a speech.

“BEING A GREEN CITY FOR OUR OBJECTIVES IS IMPORTANT”

Recalling that they have set their goal of “a green, fair and creative city” for Istanbul since the day they took office, İmamoğlu said: “Being a green city was an important part of the three main axes that we have set for Istanbul in particular. To achieve this goal, we are taking steps that will add value to Istanbul in many areas, from sustainable and environmentally friendly infrastructure to renewable energy sources, from waste management to transport. We work hard to leave a city that breathes, respects nature and lives with happy people for future generations. In the vision we have created for the future of Istanbul, the role of railway systems is also very important.

Saying, “We are in a serious investment process for the metro, which is a nature-friendly, comfortable and fast public transport,” İmamoğlu said:

“In this way, Istanbul is the city that has built the most metros in the world at the same time. We participated in the ‘Green Cities Urban Sustainability Programme’ by previously signing an agreement with the EBRD. In this context, we have told you that we will cooperate in the steps we take in the investments to be made for a sustainable city. Today, we are together to sign a loan agreement of 75 million euros within the framework of the Ümraniye – Ataşehir – Göztepe metro project. Previously, we had taken out another loan of 175 million euros for this line, which also included the EBRD, Black Sea Trade and Development Bank Societe General. Thanks to the financial support provided on August 27, 2019, we started work on this line in the fastest way on October 10, 2019. The progress of our line has now reached a very appreciable level, at 55%. Now, with the 75 million credits we received at once, we will work hard to put this line to work for our people as soon as possible.

Sharing the information that they plan to open Ümraniye – Ataşehir – Göztepe metro line in 2024, İmamoğlu said, “Because this metro line is the most important transport axis of the Finans City project, which is located on this line and is expected to employ about 80,000 people at the same time, and this is the most intense way to achieve our goal. a triggering situation. I sincerely thank the EBRD and its esteemed officials on behalf of the city of Istanbul, on behalf of the 16 million inhabitants of Istanbul, for their support for investments in the future of Istanbul and the goal of a sustainable and green city. I would like to thank my dear colleagues for all their work I hope that this cooperation between us will continue to increase, that we will carry out many projects that are very beneficial for Istanbul, one of the largest cities in Europe, one of the most important metropolises in the world, and our world together. e. Of course, I hope to take the right steps together to make sure. Good luck for our city,” he said.

PARSHAD: “WE ARE LOOKING TO FINANCE NEW PROJECTS”

In his speech, Parshad said, “We look forward to funding new projects to make the lives of the 16 million citizens of this beautiful city more beautiful. Mayor, we will be happy to support you and your team to make Istanbul a greener city. After the speeches, İmamoğlu and Parshad signed the contract protocol prepared between İBB and EBRD.