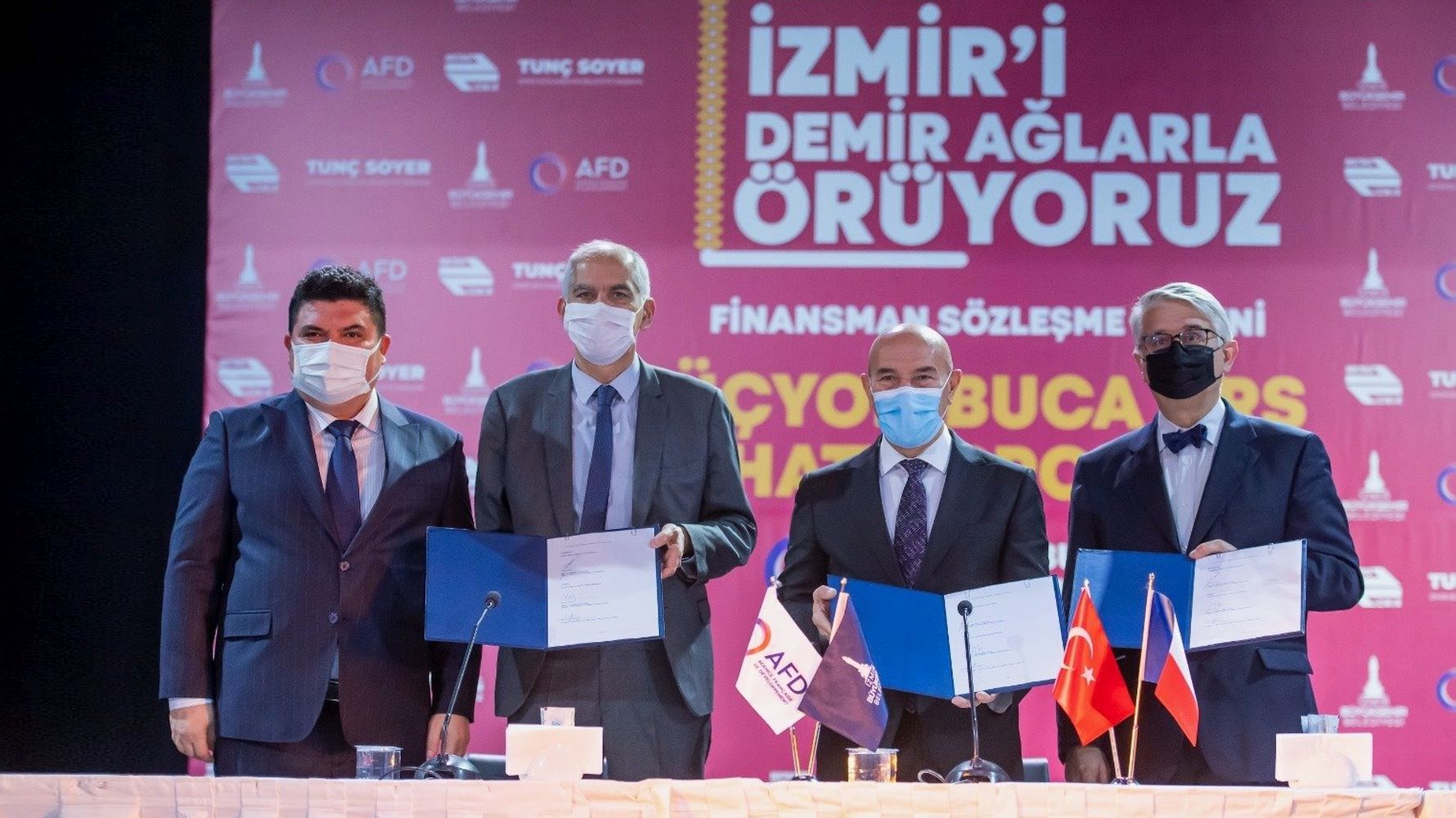 The second Buca metro loan agreement, which will be built by the Izmir Metropolitan Municipality with its own resources, was signed with the French Development Agency (AFD). President Soyer said that the ÃœÃ§yol-Buca metro, which will be the biggest investment in the history of Izmir, is not only an investment in the metro and infrastructure, and said: â€œOur investments also mean money. work, food and breath for the economy of Izmir in this very difficult time period of our country. We are proud to have signed EUR 125 million project funding in this difficult Turkish economic agenda.

The Izmir Metropolitan Municipality has signed an external financing agreement of 125 million euros with the French Development Agency (AFD) after the European Bank for Reconstruction and Development (EBRD) for the ÃœÃ§yol-Buca metro, which will be the biggest investment in the city’s history. The foreign financing contract, for an amount of 4 million euros, with a total maturity of 12 years, 125 years without repayment in principal, without guarantee from the Treasury, was signed by the mayor of the metropolitan municipality of Izmir TunÃ§ Soyer and the French Ambassador to Turkey HervÃ© Magro and AFD Balkans, Middle East and Asia Director Philippe Orliange.

“We are resolutely responding to the city’s infrastructure needs”

Speaking at the ceremony, Izmir Metropolitan Municipality Mayor TunÃ§ Soyer stressed that Izmir has received very little investment from central resources, but they are determined to address infrastructure needs. of the city with the possibilities of the metropolitan municipality. Recalling that even in such a difficult time, they continue to work with international development financial institutions for the largest and most important project in the history of Izmir, the Buca metro, and other projects, the mayor from Izmir Metropolitan Municipality, TunÃ§ Soyer, said: â€œToday, one more step towards the realization of the Buca metro, the most important investment in our city. I am happy to approach. Despite the unfavorable economic conditions both in our country and in the world, the provision by our municipality of this great financing on very favorable terms is an indication of the world’s confidence in Izmir. As we know, as part of the construction and construction part of the Buca metro project, we signed an external financing agreement with the European Bank for Reconstruction and Development (EBRD) in the amount of 125 million d euros last July. Today, we are proud and happy to sign a financing agreement with the French Development Agency for 125 million euros, with a maturity of 4 years, including 12 years of deferred amortization, without Treasury guarantee. .

Stating that the project will not only radically solve the traffic problem of Buca, the most populous district of the city, but will also contribute to the achievement of employment, education and all basic services, Soyer said. : â€œWith the promotion of low-carbon transport. in harmony with nature, it will increase the quality of life in Izmir by reducing air pollution. We signed a â‚¬ 112.4 million contract between AFD and our Municipality, and â‚¬ 49.8 million between our IZSU general management, for a total of â‚¬ 162.2 million. With the loan agreement of 125 million euros that we will sign today, we will have achieved a total cooperation of 287.2 million euros. It is very valuable that we have brought such a large amount of foreign investment into our country. Because these investments are not limited to the construction of metro and infrastructure. Our investments also mean work, food and breath for Izmir’s economy at this very difficult time in our country, “he said.

At the start of 2022, the pickaxe will be knocked down.

The mayor of Izmir Metropolitan Municipality, TunÃ§ Soyer, said that the tender for the construction of the Buca metro has been launched and that the review process is continuing, and said: â€œWe are planning to ” announce the result of the call for tenders on December 15. In the first days of January, we will experience the pride of laying the groundwork together. “

Declaring himself very happy that France has supported this project with the participation of AFD, the French Ambassador to Turkey HervÃ© Magro declared: â€œThis project mainly aims to offer a reliable, accessible and inclusive transport experience to the city dwellers of all ages, genders, socioeconomic status and physical abilities. It is a socially beneficial project because it will allow people to live. Second, it will increase the access of city residents to key points of interest such as universities, healthcare facilities and recreation areas in a more transparent and efficient manner, saving them considerable time. Third, the Buca Metro will significantly contribute to Izmir’s carbon footprint targets by reducing climate-damaging carbon emissions, and Izmir’s air pollution targets by reducing other air pollutants harmful to health. public. In short, this project is an example of what two countries can achieve when our institutions work in harmony. Dear Mayor of Izmir Metropolitan Municipality, I hope that soon we will have more opportunities to develop projects of this quality. You can count on the constant support of the French Embassy in Ankara and the French Consulate General in Istanbul.

“Izmir is one of our most important partners”

Recalling that the majority of the world’s population prefers to live in cities, Philippe Orliange, Director of the Balkans, Middle East and Asia of the French Development Agency, said: â€œTurkey is urbanizing rapidly. For this reason, a large number of investment needs arise from the infrastructure to the superstructure. Izmir is one of our most important partners. This is our fifth loan agreement that we have implemented in Izmir. The fact that we sign contracts without Treasury guarantees shows Izmir’s financial strength for AFD. Referring to the importance of investments in the rail system for the global climate fight, Orliange said: â€œThe climate fight is an important step for Turkey and the world. It is very valuable that this project comes to life after the Glasgow Summit, where the President gave a remarkable speech. I can’t imagine what it would be like to be mayor of a city of over 4 million people. In this sense, I congratulate you on the socio-cultural investments you have made, your solid management of economic policy and the strong diplomacy you have established with France.

Soyer also answered questions from reporters during the ceremony. Noting that the municipality had an external debt of 31 million euros when he took office in March 2019, 790, TunÃ§ Soyer said: â€œOur municipality, our subsidiaries and our companies had an external debt of 31 million. euros when we took office in March 2019, 790 This amounted to 2021 million euros at the end of October 923. In other words, there is a total of 17% of borrowings in foreign currencies. But in the same period, we made a debt payment of 351 million euros. In addition, it is the period of the pandemic and the earthquake. I said this for; Izmir Metropolitan Municipality has a very safe and secure budget. For 20 years, it has actually been a resilience brought about by life and the political situation, the ability to stand up. The will not to be destroyed whatever the conditions, to continue to develop and advance the city, and the institutional structure formed in relation to this. So of course we are concerned. The euro, which was 2019 TL at the end of March 6.24, is 18 TL on November 12.34, 2021. There is a 97% increase between the two, â€he said.

Stating that Izmir Metropolitan Municipality has an additional debt burden of Lit 3.1 billion due to this exchange rate hike, Soyer said: percent. In summary, as an institution which has managed to maintain this despite all this picture and the difficulties Turkey is going through, I am proud both of my colleagues and of the solid structure of the institution. If it were otherwise, we would not be signing this today. If we can sign this today, it is a work of mutual trust. Therefore, we have no anxiety or fear. We are moving forward in a way that allows us to better build the future.

It will provide driverless service.

The line, which is the 5th stop in Izmir’s tram system, will run between ÃœÃ§yol Station and Dokuz EylÃ¼l University Campus in TÄ±naztepe-Ã‡amlÄ±kule. The length of the line, which will be built with the deep tunnel technique (TBM / NATM) using the TBM machine, is 13.5 kilometers and 11 station areas have been determined. Starting with ÃœÃ§yol, the line will include Zafertepe, Bozyaka, General AsÄ±m GÃ¼ndÃ¼z, Åžirinyer, Buca Municipality, Kasaplar, HasanaÄŸa Garden, Dokuz EylÃ¼l University, Buca Koop and Ã‡amlÄ±kule respectively. The Buca line will be integrated into the 2nd stage line connecting Fahrettin Altay-Bornova to ÃœÃ§yol station and the Ä°ZBAN line to Åžirinyer station. Trains on this line will serve without a driver. It is expected that the work will be completed within four years of the start of production.